Colors in nature are often the result of pigmentation where the observed color is the result of selective absorption and reflection by the material. Objects that appear a certain color are so because they absorb all other colors in the spectrum, and reflect the one seen. Another form of color generation is not a result of pigmentation but is inherent of the material. Examples of this are peacock feathers, pearls, and wings of the Morpho [1]. These brilliant colors glisten with high reflectivity and vibrancy due to diffraction and reflection of light at the microscale [1].

Structural colors have special properties such as intensity patterns under different orientations, and brilliant sparkling or glistening on the surface. This phenomenon has been studied extensively and the papers referenced here support a multi-layered model seen in figure 4. The tree-like structures reflect the light and cause constructive and destructive interference at the micro level in the material [8].

This paper will survey a replication technique using soft lithography, identify challenges and propose an alternative. The method will replicate the microstructure of the Morpho butterfly wing using a layered deposition approach from [6]. Improvements and methods are proposed to broaden the scope of the experiment in [6] to include more critical features of the wing's microstructure.

The Morpho butterfly wing is an example of a structural color that has high reflectivity in a certain wavelength range and uniform reflection in a large angular range. Seen in figure 2 are the ridges and valleys of the wing that resulted in the color and speckles on the surface. It has been shown that the varying heights of the ridges result in the sparkles on the surface. The ridges act as scatterers of the incoherent light and the air between diffracts the light causing constructive and destructive interference [1].

High reflectivity is obtained from the multiple layers of the lamella and their separation causing multiple reflections [2]. Note the pigment at the base of the lamella in figure 4, its purpose is to absorb other colors in the spectrum enhancing the electric blue. Another important feature of the microstructure is the fact that the ridge heights are randomly distributed. This is supported experimentally in [2], as there were no diffraction spots observed which would be an indicator of uniform ridge heights.

The complete process of producing the structural color of the Morpho wing is outlined and shown in figure 4. As the incident light penetrates the material, it is scattered as it passes through the multiple layers of the lamella. The ridges scatter the light into the gaps where air diffracts and interferes with itself, finally being reflected back out of the material. The color observed is due to the constructive interference as it leaves the material. When the angle of the incident light changes, the observed color changes due to the different interference path through the material [1], 8.

Although a replica was not created in [2], their proposed model is in alignment with many of the observations of the natural Morpho wing such as the angular dependency on reflection intensity.

The results from [2] support interference within a single lamella. There is uniform diffusion due to the random distribution of ridge heights which eliminate diffraction spots. High reflectivity is achieved by the small separation between lamella and their compact tree structure, and finally, the pigment at the base of the lamella enhances the blue color by absorbing all other colors [2].

Many studies have been carried out on the mechanisms used in the structural color of the Morpho wing. The experiment discussed here attempts to replicate the microstructure using molding lithography. The techniques and results in [7] are included to survey their outcomes and explore other possible methods in replicating the microstructures. The experiment in [7] employed soft lithography to create a polydimethylsiloxane (PDMS) replica of the wing.

Details of the steps and the schematic illustration of the process can be found in [7], but the basic steps included pouring a PDMS solution on the wing, curing, lift off of the mold and the final, sputtering a layer of Pt/Au on the surface of the replica. This layer emulates the natural surface finish of the wing and will cause the required scattering [7]. The physical dimensions of the replica were measured and compared to those of the original wing as well as absorptivity and reflectivity under varying incident wavelengths [7].

Results and Conclusions on Replica Quality and Resolution

The significant difference in scale between the replica and natural wing is due to lack of penetration of the PDMS solution into the lamellar structures of figure 3. The residue left during curing is also responsible for increasing the dimensions of the replica [7].

Ultimately the replica's scale was larger, contained less tree-like lamellar microstructures but because of the added layer of Pt/Au, actually had higher surface reflectivity [7]. Wetting issues may also cause lack of resolution as the wing surface is hydrophobic. This observation was documented in [7] which allows the wing to function even in wet conditions. The soft lithography technique was positively regarded as it still produced microstructures with reasonable accuracy as seen in figure 1.

The method in [7] used the wing as a positive cast for the PDMS mold. This will inevitably result in a larger model than the natural wing. As stated, the resolution was also limited due to lack of penetration of the solution.

The method proposed is a layered approach taken in [6]. One of the major drawbacks of the method in [7] was the lack of resolution of the tree-like structures. These features are critical in the diffraction and interferences required for color generation. The methods in [6] are motivated by benefits in electronics and displays and chosen here for its feasibility and flexibility in the parameters.

The method is outlined in figure 5 and uses alternating layers of $Si_{3}N_{4}$ and $SiO_{2}$ deposited on a $Si$ substrate. This allows for anisotropic and isotropic etching used to replicate the 3D structures seen in figure 2. This method is relatively simple and makes use of multilayer deposition which is more feasible than other methods such as focused ion beam Chemical Vapor Deposition (CVD) [6].

The initial experiment in [6] resulted in a wafer that had very low reflectivity. This was claimed to be due to the tapered edges of the ridges caused by the isotropic etch and would require improvement of the etching strategy to decrease damage [6]. The color was still visible in spite of the low reflectivity.

Improving reflectivity is carried out by reversing the stack order and starting with $SiO_{2}$ on the substrate. High reflectivity was achieved by constructive interference between the reflected light of the nitride-oxide interface and the oxide-substrate interface. This stacking order also increased the number of layers as the top layer was no longer isotropically etched [6].

Using this method, many properties of the replica can be varied such as gap thickness, lamella thickness and width, and dialectic material in the gap 6. In the natural wing, the width of the air gap is such that it maximizes reflectivity but this feature is not trivial to replicate [6].

The natural wing also has irregularities that contribute to the diffraction and color. The study in 6 purposely did not recreate these irregular features. Including the random distribution in the lamellae, heights could be achieved by starting with a random uneven substrate. This could be produced by first etching the substrate with a randomly generated mask prior to layering the oxides and nitrides.

The asymmetry of a single lamella is a challenge to replicate, but some of the work has been done by the isometric etch. Observe in figure 6 the irregular pattern of the tree-like branches of the lamella, these are not perfectly square edged features. The isotropic etch in fact improves the accuracy by tapering the edges.

The cross-sectional view of the lamellae in figure 6 appear conical from the base to tip. Replicating this feature could be achieved by using a partial anisotropic etch during step 5in figure 5 by rotating the mask to expose the $[111]$ plane.

Since isotropic etching is agitative sensitive, this can be leveraged to create a more irregular pattern through uneven agitation during the isotropic etch. Conversely, since anisotropic etching is reaction rate limited, this process could be timed so as not to over-etch the top layers of the lamella. This is normally a challenge when the goal is creating highly uniform features but is a great asset when an irregularity is a goal.

Colors in nature are often the result of pigmentation where certain wavelengths in the spectrum are absorbed and the one observed is reflected. Structural colors are a phenomenon created through purely physical means. The Morpho butterfly wing is an example of a vibrant blue, highly reflective and dynamic structural color. The source of this color is caused by multiple reflections and diffractions within the microstructure. This constructive and destructive interference creates the emitting color.

The method proposed to replicate the microstructure of the wing is a layered approach given in [6]. The scope of the experiment did not include replicating the irregularities but rather focused on the tree-like structure of the lamella. These features are important for causing the diffractions and reflections that create the resulting color.

Improvements were proposed such as randomly etching the substrate prior to layering in order to replicate the random distribution of the ridge heights. In addition, the creative use of anisotropic and isotropic etching can help in replicating the cone shape and irregularities of the inner tree-like structures.

Including irregularities of the ridges and the tree-like structure was shown to produce more accurate results and the proposed method aims at reproducing these critical features, optimized for the replica's materials and scales 1, 2, 6.

Here are some easy sets of EC2 instance types that can be copy-pasted into the "AllowedValues" field of your AWS CloudFormation instance type parameter field. 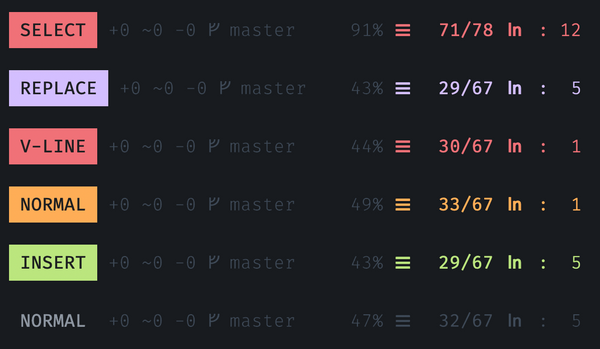 Remove the noisy colors in your Vim Airline theme. No status line background, no bright highlights, just low contrast text. Minimal use of color where needed.